Posted on September 17, 2016September 17, 2016 by norahtay Posted in thailand, travel
Now that I am living in Samoi, the notorious Full Moon party is just one island over. I had the opportunity to go through with the hostel I’m working at. I heard a lot of rumors about the Full Moon Party before going. I received a lot of warning texts giving advice like, ‘don’t accept drinks from strangers’, etc.. But I had no real clue on what to expect at the Full Moon Party on Ko Pha Ngan island in Thailand. Well, friends, family and the fellow travel community, the Full Moon Party lived up to every story you have heard. It surpassed all my expectations. Everywhere you looked there was alcohol, laughing gas, flamethrowers, beads, glow sticks, body paint, sex, dancing, selfie sticks and love.
I had no idea where my night would lead me, but I was so excited.
I started the night drinking at the hostel/bar that I was working at with the staff and a ton of patrons. The bar was outside so everyone was in the street dancing and painting glow paint on each other.

The Full Moon party was on a beach a couple blocks from the hostel. The whole strip of the beach was covered with people of all ages partying, laughing and dancing. There was this amazing energy throughout the crowd. We had a group of fellow hostel workers from South Africa, Russia and Belgium. All night we made new friends, danced on tables (we were in many GoPro videos) and ran up and down the beach. 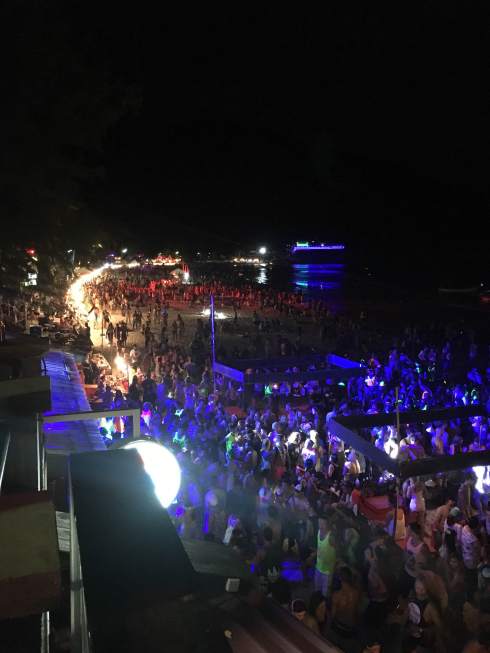 Toward the end of the night, I met a guy from Germany. And boy, he could dance. We danced with the group for a while and then ran off to climb to the top of the cliff that ran along the ocean. I honestly have no idea how I didn’t fall and break every bone while climbing this cliff. I think my former rock climbing days helped, and liquid courage. We made it to the top and watched the sunrise. It was the most beautiful site I’d ever seen. After the sunrise, we jumped in the ocean. 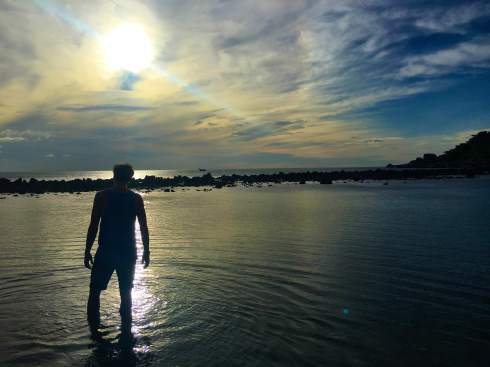 I just floated there, feeling every wave of the water brush across my skin, swaying me back and forth. I stared into the sky and felt at home. I knew this is exactly where I needed to be. I wouldn’t change that moment for the world.
After swimming, we parted ways and I wandered up another cliff to an afterparty, which started at 7 am. The party was an open building with colorful sheets hanging from the ceilings and poles. There was a DJ playing in the back and we overlooked the ocean. It was a perfect day. It’s a different experience when you go out alone. You have no one to depend on and no one to cater to. It’s just you, the music and the company of strangers. I met people from all over the world that just wanted to dance and enjoy the day too.
Later in the morning, a man kept trying to dance and talk to me. After a while he began to grab my arm to try and pull me to dance with him, as I was clearly resisting. That’s when three other people jumped in and separated him from me. These three complete strangers just took action in a situation that they knew nothing about and wasn’t even their concern. The men didn’t even know each other. The rest of the morning I could tell that they had my back and wanted to make sure I was able to enjoy the music without being bothered.
Moments of kindness like this prove that travelers are one big community in themselves. And that even though I am traveling alone and I may feel alone at times, I can look around me and know there are people feeling the same way. We all embrace each other.