Before I give you a play by play of life in the hostel I’ll start by saying, this has been an amazing experience. I would never trade my experience in this hostel for a week in a 5-star resort. Living here has been like living in my college sorority house, but instead of kitchen boys there are hostel workers, instead of a couch there are bean bags and instead of my best friends around me there are new faces everyday with new stories to learn and grow from.

Night 1: I arrived to the Bed Station Hostel in Bangkok at about 10 pm, so exhausted that I could have dropped dead asleep on the pavement outside. I checked in and was shown to my room, which is a big room with 8 bunk beds in it, curtain over the beds and a locker to store our stuff. There were two guys in my room, which I politely introduced myself to and then went downstairs to rent a towel for 20 baht (57 cents). Here’s a picture of my bunk.

I walked into the bathroom half asleep unsure how to go about this whole community bathroom thing. Anxiety kicked in… Do I just go with a towel wrapped around me? Do I wear my flip flops into the shower? Should I have brought a caddy? I don’t even own a travel caddy. Do they make travel caddy’s? What if a guy walks in when I’m changing? Maybe they are used to it? No, I’m going to change in the shower and hang clothes over door. But then do I have to put back on my dirty clothes after I shower? Is it normal to go back up to the room with just a towel wrapped around me?

Anxious thoughts subside and I opt for putting my dirty, 30 hour travel-day clothes back on my clean body. I then went back to the room and took my clothes back out to change in the bathroom. I couldn’t find my hairbrush and was too tired to care so I brushed my teeth and went to sleep. That was the moment my hair took a turn for the worse in Thailand.

Day 1: I woke up bright and early ready to see the world. The bed was rock hard, but I didn’t care. I went downstairs to brush my teeth (my room is on the 6th floor and the big bathroom is on the 4th). As I walked into the bathroom I saw a stick figure man hanging above the door… I look to my left and see another bathroom with a woman stick figure above that door. Last night, I showered in the men’s bathroom. Thank goodness no one walked in.

Off to a great start at this whole hostel thing…

Day 2: The misogynist happened… If you didn’t read My Second Day in Bangkok, here’s a little recap: a 17 year old guy from the Philippines/California learned I was traveling alone and was confused because he thought that since I am a woman, I can’t take care of myself. Hmm.

But then I went downstairs for breakfast and was greeted with a bowl of Pok, which is a delicious rice porridge. And everything was better.

I make friends with a group of friends from Europe that are going to University together in Singapore. They are here for the weekend. Casual.

Night 2: The group of friends from my room and I bring back a couple beers to our hostel to drink before going to the Red Light District. We walk into a huge pregame. Beer pong, moonshine, card games, etc. I meet a guy who also graduated from Florida State University, he’s living here while teaching English in Bangkok. I take a shot of moonshine, this has nothing on Dade City moonshine. Shout out to lake house summers. 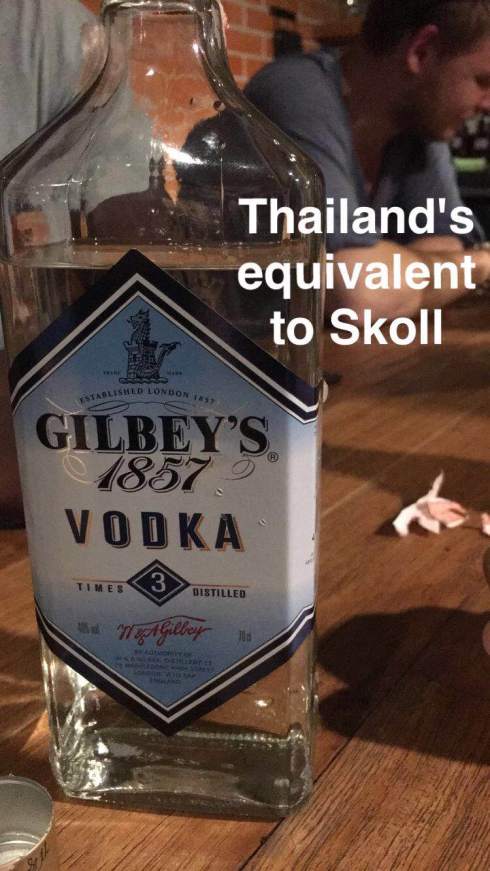 Day 3: I’m exhausted. There’s a few things I still want to do, but I am here for a week so there’s no rush. I go down for breakfast and sit at the community table. I meet a group of people from the Peace Corp. They are here for the weekend. I hang around the hostel all day. Below is a picture of the common area on the second floor. Everyone is sitting on bean bags. 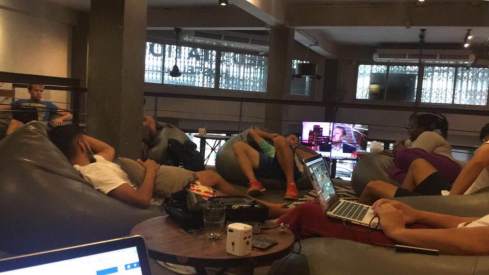 I spent the day on the couch, and popped out for lunch with a guy from the Peace Corp. He visits Bangkok a lot so knew where to go. Below is a picture of the restaurant front we went to, which was only a couple minute walk from the hostel. 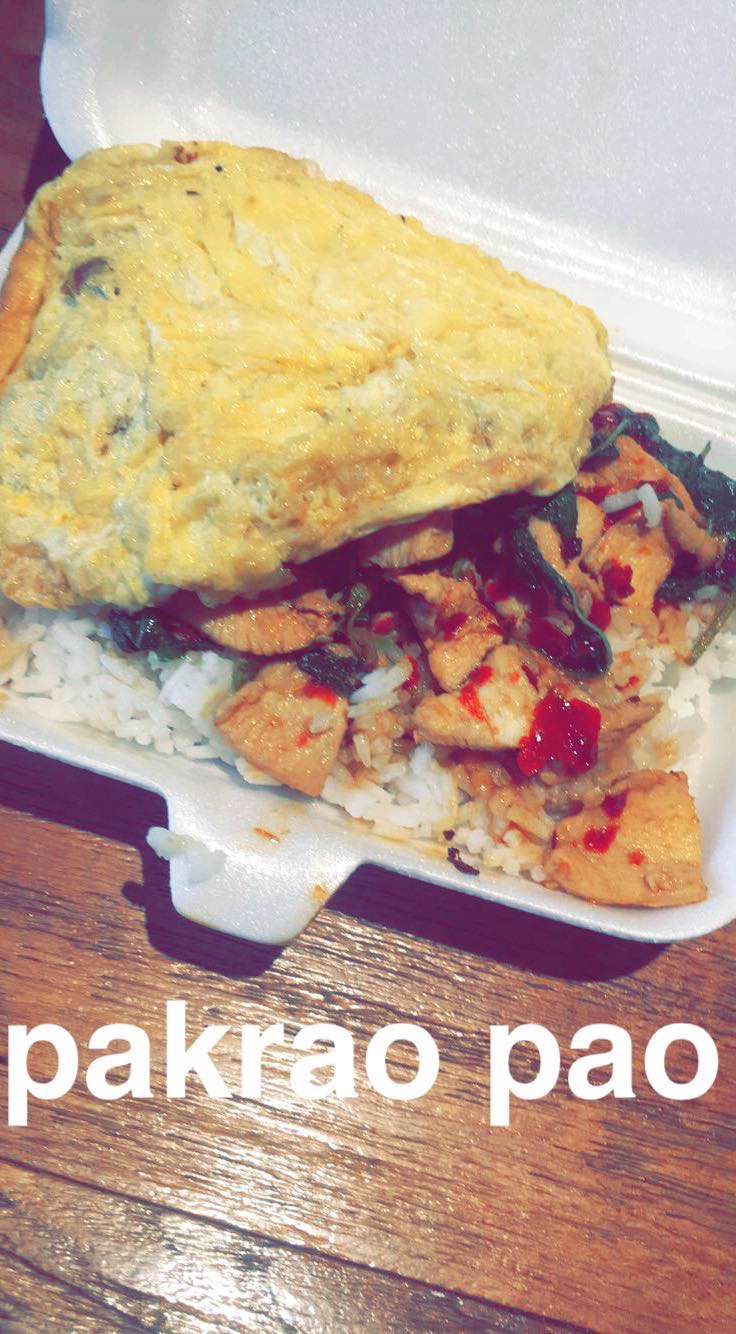 For dinner, we went to another little restaurant front and I ordered Tom Yum soup. Most people bring their meals back to the hostel because the restaurants are outside, aka no a/c. Both meals that day were extremely spicy, but I powered through… kinda. Kat, you would have been proud. 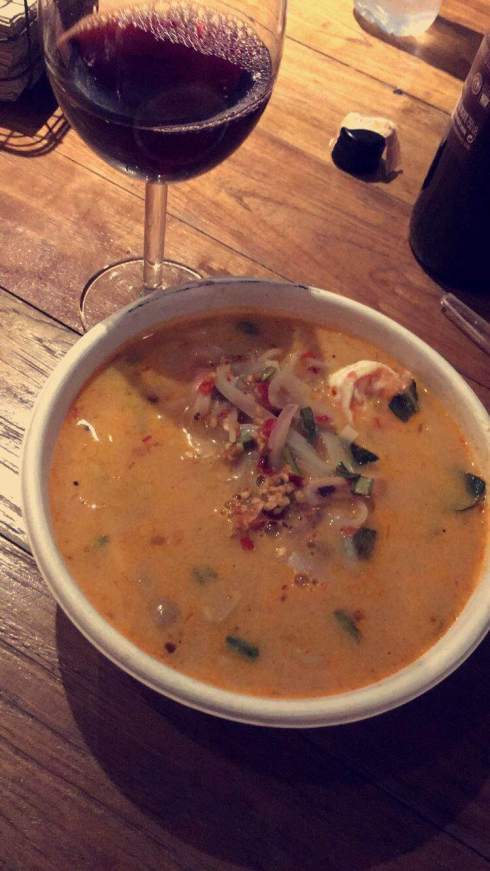 Night 3: Pregame #2 happens, only this time instead of going out we all stayed in and played Ring of Fire and other card games. There were about 15-20 people down here at one point all drinking and playing games together. But this wasn’t like your normal pregame. This pregame had language barriers and new drinking traditions to learn and witness.

To my left were the Germans who were playing the card game, Asshole and drinking a bottle of vodka, which four of them finished in less than an hour.

Past them were my hostel roommates who were from the Netherlands, Denmark and Belgium. They were all drinking beer and playing Piccolo. At the end of the night, it is me and Alex, a guy in the Peace Corp, and Elliot from the UK, playing Ring of Fire. After the Germans got drunk and leave to go out, we join the game of Piccolo. Piccolo is fun, I had never heard of it before. It’s an app that tells the players different things to do. Like, “Norah do us a favor and finish your drink.” Safe to say we all stumbled back up to our rooms later that night.

This was by far my favorite night.

Staying at the Bed Station Hostel has been amazing. I love connecting with people here and getting to know people from all over the world. Everyone has a story to tell and slowly learning others is just the beginning.

2 thoughts on “My First Three Days in a Hostel”