Posted on September 20, 2016September 21, 2016 by norahtay Posted in thailand, travel
Bangkok is crazy. Every aspect of the city is different than anything I have ever experienced before. Here are some things I learned about Thailand while staying in Bangkok for seven days.
First, the roads. They drive on the left side, as does most the world, so that wasn’t a shock. The shock was in how they drove. Think of New York City taxi drivers mixed with kids playing with their dirt bikes and 4 wheelers in the mud, slapped onto the narrow roads of Thailand. And then you have the motorbikes that weave in and out of traffic. They don’t seem to abide by the same rules as the cars, or any traffic rules for that matter.
Despite their crazy driving, Thai’s are very friendly. They seem to enjoy helping tourists and are understanding when you don’t know their language. (Though I am slowly trying to learn). But this could also be greng jai, which means they don’t want to cause any trouble.
They also didn’t run me over when I ran into traffic to take this photo.

While venturing through the local markets I discovered that Thai’s love having their picture taken. I would walk through these tiny alley ways, where it would feel like a little village inside a big city. As I took photos, they would smile, laugh and wave.

The food is to die for. It’s rich with flavors, but very cheap. Looking at the food, it looks pretty healthy. It’s not fried and loaded with fat like American food. But they say Thai food has a lot of chemicals and msg’s in it. Which is interesting because I do feel my stomach bloat a lot after eating certain foods, maybe from the extra sodium? 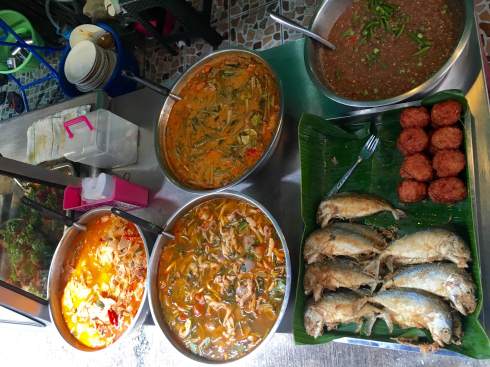 I also discovered that I have stomach of steel. Every article I read before coming to Thailand said to be careful of the food and whatever you do, don’t eat the street meat.  Well, I haven’t turned down an ounce of food offered to me. I’ve tried some questionable looking food and haven’t had an issue. Knock on wood.
Here’s a video of Elliot and me trying a street hot dog wrapped in a waffle.
Thai’s are usually small, petite people. So me being 5 ft 7 inches, I tower over a lot of women and men. I also have light hair, which is something Thai’s admire and yearn for. It’s safe to say I stick out like a sore thumb. As I walk, I notice people taking pictures of me. People also come up and ask to take photos with me. I don’t know if I’ll ever get used to that.
Thai’s also have no sense of lines. If they see an opportunity to cut you in line, they will. Don’t get mad at it, they don’t think of it as rude.
Old Thai women are also very strong and pushy. If you are in their way they will just ram right through you. I never knew a 4 foot something lady could be so strong.
From the delicious food and crazy taxi drivers, Bangkok was certainly an experience I’ll never forget.