I spent my morning at the War Museum in Siem Reap, Cambodia. The museum is home to war veterans, military vehicles & weapons and stories of Khmer’s past.

The museum gave me an insight into the hardships Cambodia faced in the last few decades.

Cambodia went through a civil war and mass genocide during the Khmer Rouge from 1975-1979. The Khmer Rouge began to form as the Communist Party of Kampuchea in 1960. The party was led by Pol Pot as they moved their way up from the jungle into the political forefront by 1970. During those four horrendous years, 1.7 million to 2 million people were killed- about a quarter of Cambodian’s population. Men, women & children died from disease, execution, overwork & starvation.

“During his time in the remote north-east, Pol Pot had been influenced by the surrounding hill tribes, who were self-sufficient in their communal living, had no use for money and were “untainted” by Buddhism.

When he came to power, he and his henchmen quickly set about transforming Cambodia – now re-named Kampuchea – into what they hoped would be an agrarian utopia.

Declaring that the nation would start again at “Year Zero”, Pol Pot isolated his people from the rest of the world and set about emptying the cities, abolishing money, private property and religion, and setting up rural collectives.

Anyone thought to be an intellectual of any sort was killed. Often people were condemned for wearing glasses or knowing a foreign language.

Hundreds of thousands of the educated middle-classes were tortured and executed in special centres.”

The museum offered a free tour guide, mine was the ever-so-interesting Moun Sinath, also known as the Cat. One morning in 1975, Sinath was out of his home fetching water when his entire family was killed by the Khmer Rouge. He left that morning a young boy & came back an orphan. He survived off of bugs, rice & any other scraps of food he could find during the war.

Instead of having 9 lives like a cat, Sinath had 13. Sinath was shot, blown up by various landmines & injured 13 times during his life & the duration of the war. After the war at 23 years-old, Sinath with one leg, one able eye & many pieces of shrapnel still in his body- built a life in Siem Reap with his family where he works as a tour guide & Tuk Tuk driver. 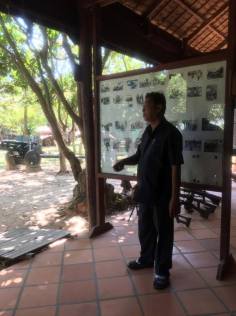 The museum taught me a lot about the specifics of the war. It grounded me & gave me an in depth look into what Cambodian’s went through. I read how children were forced to fire guns too heavy to hold, mother’s babies were drowned in front of them & men were tutored for information.

I also learned about S21 in Phenom Penh, which was a torture, interrogation & execution center ran by Duch- a former teacher. When prisoners arrived to S21, they were separated from their families, strip searched & shackled to the floor without food, blankets or anywhere to relieve themselves. During the days people were held awaiting torture, many were infested with ringworms & lice. Of the 17,000 people that were taken to S21, only seven survived.

At the War Museum, I stood alone reading papers stapled to the wall with the details of S21- stories of the survivors & accounts from the soldiers. All of a sudden, I had this awful feeling come over me- it felt like my chest was being held down. I deemed it as dehydration, drank water & kept reading. But then I lost my breath. It became hard to breathe and the feeling on my chest grow tighter. This feeling I was experiencing was just a sliver of the feeling that Cambodian’s must have felt during the war.

The War Museum is an easy bicycle ride a few kilometers out of the city center, costs $5 & takes 1-2 hours to walk through.

I look forward to learning more about Khmer Rouge & Cambodia’s deep history as I continue to travel through the country.

If you would like to learn more about the genocide, read First They Killed My Father by Loung Ung, which recalls a child’s experience during the war. It was the first book a traveler gave to me in Bangkok (my first stop in September 2016 on my Asia trip). The book has been passed from traveler to traveler ever since. I received this Instagram message recently.

Fun fact: Angelina Jolie directed First They Killed My Father with Ung & the world premiere is on February 18th, 2017 in Siem Reap! Think I can sneak in? Though I don’t know if I have anything fancy enough to wear in my backpack… The film will also be featured on Netflix in the future.