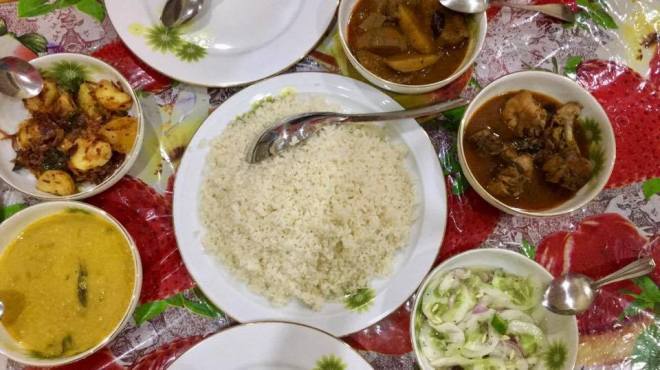 What a day… When people talk about traveling, they forget to mention how long & exhausting traveling between countries can be. But I’ll tell you, it’s stressful. After a 24 hour travel day- full of waiting in long lines, long layovers consumed by sleeping in chairs (kinda) & mediocre airport food- I made it to Negombo, Sri Lanka.

First I’ll say, Asian airlines really know how to step it up. I had an awesome flight with Bangkok Airways from Chiang Mai to Bangkok, but then a not-so-awesome 10-hour layover. Then I flew on Sri Lankan airways, which was fine & dandy except the people on the flight were not so dandy. I was in the back in between a group of 30 Chinese men (& if you know anything about Chinese you will understand why this is a nightmare) and next to a group of six Sri Lankan guys who looked like they just stepped off of an episode of Jersey Shore.

This flight was like an animal house. I have never heard a plane be so loud at 9 am. And it’s funny to listen to other languages because to me, it sounds like everyone is talking over each other. I wonder if that’s how people speaking English sound… First observation about Sri Lanka: I don’t think Sri Lankan’s have a sense of personal space. If I had a rupee for every butt that rubbed up against me during that flight, I wouldn’t have to be sleeping in a budget guest house right now. American’s can be rude, but at least we (well, most of us) understand personal space.

After the flight, we were shuffled onto a shuttle bus, which I was videoing to put on my Instagram Story when a man asked to be in my photo. I showed him my whole story, full of every step of my travel day & then took a photo of him.

Now for customs… This part always makes me nervous. They are just so serious. Without exchanging any words, the woman stamped my passport through (I applied for a 30-day visa online). Then I was greeted with people yelling at me to buy their goods. I took cover in a corner to collect my thoughts & look for an ATM to take out Sri Lankan Rupees. 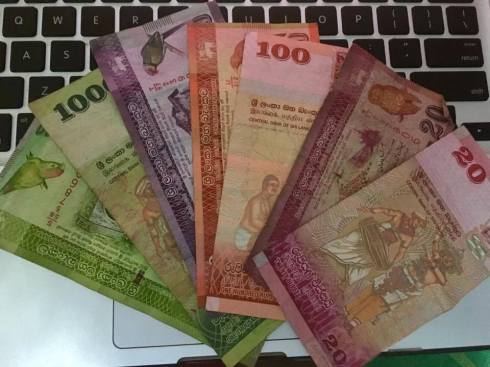 This is 2,740 Rupees, which equals… $18.50. Honestly, I can’t help but look at new currencies as Monopoly money, the money never feels real to me until I see what it can buy.

Now to find my way to the guest house… After bargaining with multiple taxi drivers, I finally got the taxi fare down to 800 rupees (owner said it should cost 800-1000 rupees to bring me to the guest house). The taxi driver was so nice & in the end gave me the ride for 700 rupees. I think he liked me because I was asking him how to say greetings in Sinhala like hello, goodbye, thank you. Plus a smile goes a long way.

After I checked in, I headed for the beach. It was pretty, but nothing amazing. 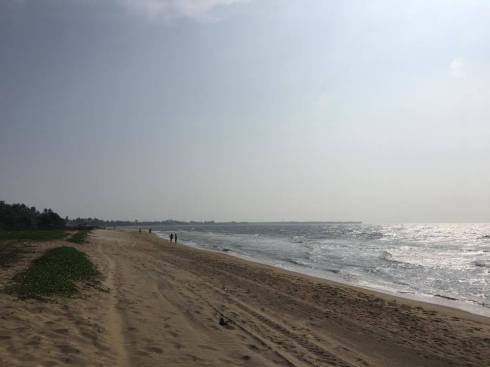 After the beach, I walked around the streets. The houses in this area are really big & run down, but they are all guarded by big gates & fences.

I am not exaggerating when I say, every single man that I passed on the street said something to me today. None of it was mean, some a little derogatory, but mostly just the normal hellos, where are you going, do you need a ride comments. But if that is any indication on how the next month will be, it’ll be exhausting.

Now I am sitting on my hard bed waiting for dinner. The owner is cooking the guests dinner tonight & breakfast tomorrow for $2. I am so excited for a home-cooked Sri Lankan meal! Everyone has told me how amazing the food is here.

Edit: Food was delicious! Not very spicy to me, but the two other people’s eyes & noses were watering (thank you, Thailand). The flavors were so different from any other Asian food I’ve tasted. I think the spice was jalepeno based instead of chili. I’ll do some Googling on the subject. Top left & then continuing clockwise, was potatoes with spices & onions, to the right was mango in curry (my favorite), chicken in a thin sauce, cucumber salad, mystery yellow curry & rice in the middle. The woman kept serving us more & more food! Every time my plate was almost empty she would run over & load it back up. It was basically what I imagine Italian Grandma’s to be like.

Food: Top left & then continuing clockwise, was potatoes with spices & onions, to the right was mango in curry (my favorite), chicken in a thin sauce, cucumber salad, mystery yellow curry & rice in the middle. The woman kept serving us more & more food! Every time my plate was almost empty she would run over & load it back up. It was basically what I imagine Italian Grandma’s to be like. 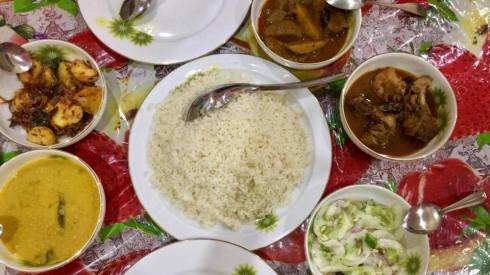 Fun side note: A girl at the table said I’m going to need to get used to eating with my hands. Apparently, most local spots don’t give you silverware, same with India. Paulla, I hope you’re ready.

Goodnight world, I am off to Kandy in the morning.